DRMetrix, the industry’s leading television research company, has released its 2017 industry study providing insight into the size of the brand-direct and direct response television industry.

DRMetrix is the brainchild of Joseph Gray, a 30-year television advertising veteran who has long thought that the size of the brand-direct and direct response television industry has been under-estimated by mainstream television research companies. The ability to measure the size of the industry alluded him as research companies were unwilling to segment ‘direct response' commercials from traditional branded commercials.

“Back in 2003, a group of TV professionals joined together with the Direct Marketing Association (DMA) to form the DMA Broadcast Council”, Gray recalls. “I was invited to co-chair the Research Committee. We worked on a whitepaper to document solutions that would enable the direct response industry to quantify itself with credible research. We were hoping to convince the television research companies to start flagging commercials that included 1-800 numbers and web addresses but they were unwilling to do so.”

Nearly a decade later, Gray mustered the resources and started DRMetrix to tackle the problem. Prior to the beginning of the 2015 broadcast year, the company deployed its AdSphere™ monitoring platform which today monitors over 120 national cable networks 24/7/365. AdSphere™ was designed using the latest “automated content recognition” (ACR) technology along with advanced pattern and optical character recognition technologies to sniff out any television ad or program that includes direct response attributes such as 800 numbers, web addresses, SMS, etc.

AdSphere projections for the 2017 broadcast year are the result of monitoring 130+ national cable networks. To date, AdSphere has identified over 7,700 brand-direct and direct response brands which have included some combination of 800, Web, Mobile App Response and/or SMS allowing consumers to directly respond. In addition to detecting over 272,000 infomercial (28.5 minute) airings, AdSphere has detected an astonishing 25.7 million spots with an average run time of 39.32 seconds up to a maximum of 5 minutes in duration. For 2017, AdSphere has calculated the valuation of industry inventory at $7.8 billion dollars applying average direct response rates and weighting the value of spots running across two different types of national cable ad breaks.

Gray projects that AdSphere™ estimates for network cable direct response valuation are 3-4 times greater than what leading television research companies have reported based on differing philosophies of what constitutes ‘brand-direct' and 'direct response’ vs. ‘brand’ the lines of which have blurred over the years. DRMetrix presents the following facts for the industry to consider: 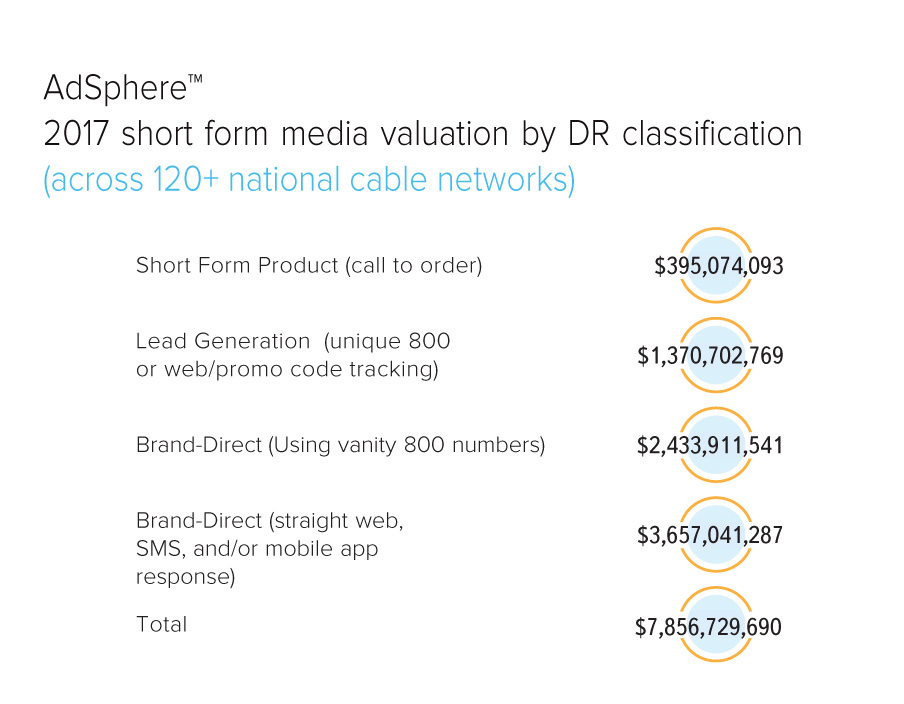